DOIW condemns the killing of children and defenseless people of Iran 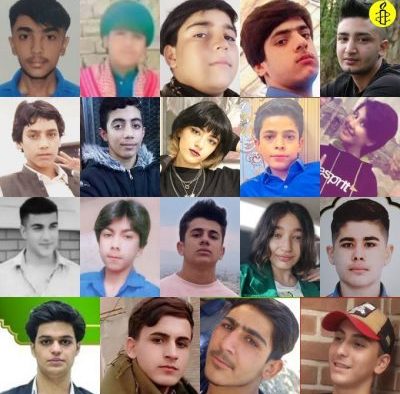 It is three months since the nationwide protests by the people of our homeland started with the slogan “Women, Life, Freedom” after the heinous murder of the 22-year-old Mahsa Amini. During these protests hundreds of people have been targets of the bullets of the police and security forces of the religious dictatorship and have died. One distinguishing feature of this bloody repression is the shocking violence towards and the killing of children and teenagers. This has outraged the people against the criminal and fascistic regime in Iran and has met with protests by progressive and peace-loving people of the world. In a statement the United Nations Children’s Fund (UNICEF) has asked the Iranian regime to stop violence against children and teenagers and to recognize their fundamental rights, including the right to hold peaceful demonstrations. UNICEF has announced that although official statistics have not been released, it has been determined that at least 50 children and teenagers have died during the recent protests in Iran, which is a terrifying statistic.

According to HRANA, human rights organisation, at least 402 protesters have been killed by the repressive forces of the Islamic Republic since the 17th of September 2022, when nationwide protests began in Iran (as of 18th November 22). At least 58 of those killed were children and teenagers under the age of eighteen. These brutal killings have taken place in more than 150 cities of the country. In addition, thousands of male and female university students and other protesters have been kidnapped and are currently being subjected to the most severe physical and mental torture in Islamic Republic’s prisons across the country.

The Islamic regime of Iran has not only refused to take responsibility for these killings but has made up deplorable lies and attributed the killing of children and teenagers to accidents, suicides, poisoning, or to ISIS, so that it might prolong its shameful life. Among the youth and children who have died are Abolfazl Adinezadeh, a 16-year-old student from Mashhad, who was killed on 8th October 22, when Revolutionary Guards fired 25 bullets into his stomach and chest, to Kian Pirfalak, an innocent 9-year-old child from Izeh who was shot dead in the middle of November and his grieving mother bravely exposed the regime as his killers.

Despite the threats and pressures that the Islamic Republican regime brings to bear on the families of those killed by its armed thugs, these families and especially the mothers of the dead children talk about the crimes of the dictatorial government of Iran with unprecedented courage and expose the lies that the criminal government fabricates to conceal the truth.

The brutal slaughter of the people who are at the end of their tether with the experience of poverty, violence and oppression, and the targeting of children and teenagers of our homeland with all kinds of deadly weapons, has once again revealed the regime’s weakness as well as the capacity of political Islam for suppressing the just demands of the hardworking people of Iran. The regime takes the bodies of its victims hostage and puts pressure on the families not to reveal the truth of how they died, in exchange for receiving the bodies of their loved ones, and insisting on night-time burials, the Islamic Republic of Iran has proved that it can and is willing to commit any vicious act to maintain its inhumane and autocratic rule. But the Supreme Leader, the bloodthirsty dictator whose autocratic rule has been targeted by the people today as they chant ‘death to the dictator’ throughout Iran, deceitfully attributes the popular protests to foreign factors. But these tricks, just as they could not prevent the fall of the dictatorial monarchy of the Shah, will undoubtedly not save the regime of the Supreme Leader either. In the not-so-distant future, the united struggle of the progressive and popular forces, and especially the courageous struggle of Iranian women fighters, will send this regime to the dustbin of history.

Today, on November 20, 2022, International Children’s Day – a global occasion to protect children’s rights around the world – DOIW once again draws the attention of progressive women’s organisations to the terrible tragedies that are currently taking place in our country. We ask you to publicise and expose the gross violations of children’s rights in Iran in order to:

Towards broadening the united struggle of freedom-loving men and women and patriotic and progressive forces who make up the people’s movement for freedom from the religious regime’s tyranny, and

For the establishment of a national-democratic republic, and for freedom and social justice!

Until the final and official statistics are announced by human rights organizations, the names and details of a number of children and teenagers who are reported to have died due to gunshots or baton blows or in other ways at the hands of the regime’s security forces, according to social media and using the data published by HRANA, the group of human rights activists in Iran.

25- Nika Shakarami, 29 Shahrivar (20th September 22), Tehran, a 17-year-old girl from Khorramabad, who went missing in the rally on 20th September in Tehran’s Keshavarz Blvd. Her body was found on 30th September 22 in the morgue of Kehrizak