European regional proposal for resolution against imperialist war and NATO 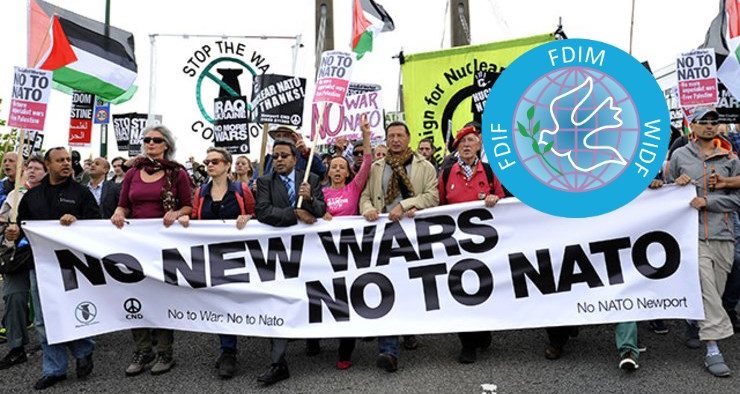 We, the women of the WIDF Steering Committee that convened in Pyongyang on April 19 – 23, 2018 agreed upon the following:

The imperialist war is the solution for the exploitative system to increase its profits in case this is not possible by the commercial war and the anti-people measures.

From this point of view, contradictions are intensified in areas economically and geo-strategically important for the interests of business groups and for intra-imperialist competitions. Such areas are the South Pacific and the Sea of China, the Arctic, Latin American regions and Africa. It seems that South East Mediterranean and the Balkans are of strategic importance.

The imperialists divide the world by spreading death and refugees. That is why they cultivate nationalistic and religious hatred among the peoples.

The imperialist war in Syria has been going on for seven years now, costing hundreds of thousands of dead people, millions of refugees and immigrants. The real causes of the war are Syria’s geographical location and its wealthy resources. Our thought lies with the people of Syria and the people of the region who face the escalation of the imperialist aggression of the USA, UK, France and their allies NATO and the EU. We are at risk of a generalized war.

The murderous state of Israel continues for decades now the occupation of the Palestinian territories and tortures the brave Palestinian people with settlements, murders, thousands of political prisoners.

Cyprus remains for 44 years now under Turkish occupation and splitted, while the Cyprus issue remains an international issue of foreign invasion and occupation. The escalation of Turkish aggression with its constant challenges in the Aegean and against Cyprus intensifies the peoples’ concern in the region.

NATO, this imperialist mechanism is responsible for the massacre of the peoples of the entire planet since it was founded in 1949. It is the civil-military alliance of the US and the European capitalist states. Wherever NATO goes it spreads war and destruction. It is the murderous machine of the imperialists. It does not recognize borders and sovereign rights.
The last NATO Summits on 2016 and 2017 decided to gather huge military and modern weapons in Eastern and Central Europe and the Baltic countries as well as to strengthen the naval forces in the Black Sea, the Eastern Mediterranean and the Aegean. The EU- NATO plan to surround militarily Russia is fully in progress while their competition has been escalating. NATO troops are currently being deployed in the whole perimeter of Russian borders.

We, women of European organizations of WIDF unite our voices against every imperialist war. We have no interest in the wars that the monopolies design and are implemented by the governments that serve them through participating in NATO’s and the EU’s blood-stained mechanisms.

We must not let our blood and our children’s blood spill over the interests of the industrialists, bankers, ship-owners that are being served by states or international organizations.

The concepts of “independence” and “sovereignty” should mean for us that our peoples will have the right to define their present and future on their own, to use?? the wealth they produce in a society that they have the power themselves
For the WIDF organizations the defense of the country is not limited to the defense of sovereign rights. For this reason, we connect the defence of our homeland with the struggle for liberation from the imperialist plans; with the overthrow of the power of monopolies and multinational companies; with the construction of a society where the wealth won’t belong to the few, but it will be the people’s property. The economy will function according to a centralized plan controlled and checked by the workers themselves, aiming at serving the people’s needs rather, than increasing the monopolies profits. In this society the equality and emancipation of women will be realized according to our struggles.

We express our full solidarity with the Syrian people who face the barbarity of an endless imperialist war.
We stand by the side of Palestinian people and women, who are struggling to live in a free homeland, with the people’s dominance, at the borders of 1967 and East Jerusalem as capital.
We express our solidarity with the Cypriot people, both Greek Cypriots and Turkish Cypriots, in their struggle to put an end to the occupation, for a reunited Cyprus, reunited people and country, demilitarized, with one single sovereignty, one citizenship, one international entity, free from guardians, guarantors, foreign bases and troops.