Political Prisoners under the Threat of Execution 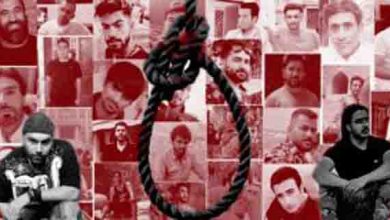 DOIW has called on progressive women and sister organisations to act to stop more executions of protesters, in Iran. The following is addressed to the WIDF organisations worldwide.

To: Sister Organisations of the Women’s International Democratic Federation

As you know, four months have passed since the ‘woman, life, freedom’ movement was born in Iran, against the dictatorial ruling regime. This movement started with peaceful demonstrations of women and other social forces, including students, school children, teachers, and workers, against the death of Mahsa Amini in custody, last September. During this period, the regime has responded with bullets and the bloody suppression of defenceless protesters, especially in the deprived and oppressed regions of the country such as Baluchestan and Kurdistan provinces.

During the last four months, the Islamic Republic has killed, with utmost brutality, more than 500 women and men from all walks of life. Among those killed are more than 60 under the age of 18, and yet the regime has not managed to extinguish the flames of the movement of the despairing masses who are at the end of their tether with poverty, despotism and with runaway inflation. This revolutionary uprising is deeper and more extensive than the previous ones and the people are determined to make fundamental changes. For this reason, the Islamic rulers of Iran are intensifying repression, terrorising the people, brutally torturing detainees in order to extract confessions, conducting show trials, and passing of the death sentence.

The executions of the citizens of Iran are taking place at a time when many of those on trial have been denied a justice and due process, namely the right to appoint their own lawyer, and being given the death sentences in summary trials that last no more than a few minutes. In its Islamic courts, the Islamic Republic of Iran identifies the peaceful protests of women, the young and the working people of Iran, as ‘fighting Islam’ and ‘being at war with God’. Currently, more than 18,000 arrested protesters are held in the terrible prisons of the Islamic Republic and suffering the most brutal tortures. Among those arrested are thousands of women and men – students, workers, farmers as well as reporters, artists, teachers, sportsmen and sportswomen, and even schoolchildren. These prisoners are subjected to brutal tortures to force them to confess to made up charges against them, such as having links with foreign powers. Youths under the age of 18 have also been tortured to extract confessions.

In the last two weeks, the Islamic Republic of Iran, has hanged two young protesters – Mohsen Shekari (23-year-old from Tehran) and Majid Reza Rahnavard (23-year-old from the north-eastern city of Mashad) – following extensive torture, and having charged them with being ‘at war with God’ and ‘endangering the security of the country’. Today, too, they are preparing their gallows for the execution of more political prisoners just to prolong the regime’s disgraceful existence. According to official media linked to the Judiciary of the Islamic Republic, in the last few days, in show trials death sentences have been passed on several other political prisoners, among them: Mohammad Mehdi Karami, Seyd Mohammad Hosseini, and Mohammad Beroghani.

Mothers, fathers, and close family face threats and violence when they try to mourn their loved ones, in burial ceremonies or the traditional mourning on the 40th day after death. There have been several reports of cases where the Islamic Republic’s agents have buried the dead themselves in the middle of the night, in obscure graves. Despite the threats and harassment, the mothers, and families in mourning, withstand the violence of the Islamic Republic’s security forces and hold commemoration ceremonies for their loved ones. (These draw large groups of people who attend in solidarity and to pay their respect). But the Islamic Republic of Iran disrupts even these mourning ceremonies, attacking those in attendance, and killing many more young people in the process. This is a bloody cycle that is continuing in Iran.

The Democratic Organisation of Iranian Women expresses its sympathies with the bereaved families and calls on all the progressive forces of Iran and the world, especially progressive women’s organisations to condemn these acts of violence in Iran, especially the death sentences, and to protest against the brutal violation of human rights, and to demand an end to this process.

The response to the peaceful and legal protests of the people who have no way to protest oppression, corruption, and dictatorship, other than to come to the streets with their bare fists, should not be sending the young to the gallows and killing them. Today, the risk of execution threatens the lives of Iran’s political prisoners. We must stop the despotic regime of Velayat Faqih, the Supreme religious leader, from killing the young with all our might and in any way possible.

The unconditional release of Iran’s political prisoners is one of the most urgent demands of our current freedom movement.