The Coronavirus Crisis and its impact on Women 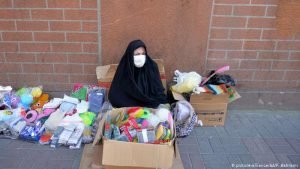 The Democratic Organisation of Iranian Women is in solidarity with the women who are grappling with the fallout of the lethal COVID 19 virus in their countries. Besides claiming thousands of lives worldwide, this emergency has also exacerbated people’s economic conditions and increased their i

nsecurity. This has been especially problematic for countries without sound public health systems and where neoliberal economic policies have led to economic and social inequalities and harm.

It is reported that only 44% of the world population have access to health insurance, meaning that 56% – equivalent to 4 bn people – are deprived of health service support during this Coronavirus outbreak. Around one quarter of the world population is in lockdown at home and obliged to observe ‘social distancing’. Many will lose their livelihoods without state assistance and are forced to work for fear of hunger and destitution, risking their lives and losing them in many cases.

It appears that the effect of the spread of the virus has been not only the disproportionate loss of life among the poor. The emergency has had detrimental social and economic impact on women, especially workers and the poor, through job insecurity, unemployment, escalation of domestic violence and other social harm, which is claiming victims alongside the epidemy. Women and also children experience the impact of these developments most acutely.

According to a report by the International Labour Organisation, ‘globally, there are 136 million workers in human health and social work activities, including nurses, doctors and other health workers, workers in residential care facilities and social workers, as well as support workers, such as laundry and cleaning staff, who face serious risk of contracting COVID-19 in the workplace. Approximately 70 per cent of jobs in the sector are held by women’ (07 April 2020 – https://www.ilo.org/wcmsp5/groups/public/@dgreports/@dcomm/documents/briefingnote/wcms_740877.pdf – Accessed 18 April 2020).

The spread of this pandemic, not only in Iran but in many countries, has meant that the destructive outcomes of neo-liberal economics and its demand for the privatisation of health service have become obvious for all to see.

In Iran the privatisation of the health service, in order to allow a few to profiteer, has led to the worsening of the conditions of the workers, as profits are prioritised over the needs of patients, and the pay of nurses and medical staff are cut. In recent weeks news of the dismissal of nurses at a private hospital and the adjustment of the pay scales, while nurses are on the frontline of the battle with COVID 19, has puzzled the public in Iran. Temporary contracts abound not only in private hospitals, but also in state-run hospitals attached to universities. The 89-day contracts predominate for nurses, the majority of whom are women, so that the employers prevent the nurses from qualifying for the benefits that contracts over 90 days would afford them. The deputy of the Health Minister has conceded that ‘death from Coronavirus is more prevalent among the poor because they do not have access to healthcare’.

A quarter of the World’s Population in lock-down

The World Health Organisation (WHO) has warned, and many governments have acknowledged, that during COVID-19 lock-down the incidence of domestic violence has increased. The director of WHO has stressed that the closeness during this time, as well as stress and financial pressures lead to increase in violence. This phenomenon is particularly noticeable in less developed and patriarchal societies where violence against women is often not criminalised. In the absence of civil bodies, there is no safeguard against violence, including domestic violence, during lock-down.

While in 125 countries worldwide there are laws against sexual violence and rape in marriage, regrettably our country has not passed such a law and there is no provision for safe houses or other support for women who have suffered violence. According to statistics the level of violence against women in Iran is twice the rate worldwide.

While the world is looking for ways to counter the virus which has claimed the lives of hundreds of thousands globally and continues to do so, social distancing has become one of the most obvious means of avoiding the spread of the disease, yet prisoners, especially political prisoners, are under conditions that increases the risk of contracting the virus.

In Iran, thousands of prisoners including women political prisoners are living under severely unhealthy and dangerous conditions. The regime’s response to civil protests by workers, women, students and the destitute has been brutal suppression and imprisonment. Currently the prisons in Iran are full of freedom-loving men and women who have contracted this virus and the regime is refusing to release them. Among the prisoners is Narges Mohammadi, civil and human rights activist, who despite suffering from lung disease is exiled to a prison in Zanjan. She writes: ‘In ordinary prisons because of the meagre budget the quality of food is very bad and there is not enough food, especially fruit or vegetables that are completely absent, and the physical health of prisoners is in danger. On the other hand, because of Coronavirus, the visits have been stopped for long-term and the prison is under complete lockdown, leading the prisoners’ mental health to suffer. Mothers cannot see their children even once a week as before anymore and are aware that their children’s mental well-being is being damaged as a result…’. The call to free political prisoners has gained even greater urgency now.

Worldwide we have seen similar atrocities against women, and children. We support the recent call by the Palestinian Federation of Women Action Committees for the release of 200 Palestinian children and 43 women and girls who are held in the prisons of Israeli occupation, and whose lives are at risk due to their poor health conditions.

In order to deal with the current health crisis, its political fallout and the ratcheting up of military tensions, as well as the aftermath of the COVID-19 crisis, there is a need for international solidarity, so that it will not be the interests of the profiteers but the interests of the masses that will be met as we come out of this crisis. We support WIDF’s position that in order to build a better world, saving the environment and safeguarding natural resources must be at the top of every government’s agenda. Violence against women and their exploitation must end. Access to free healthcare to be made available for all. And as the General Secretary of UN has stated, at the same time all economic sanctions and wars must end, in order to achieve a lasting solution.