No to War, No to Sanctions, No to Despotism 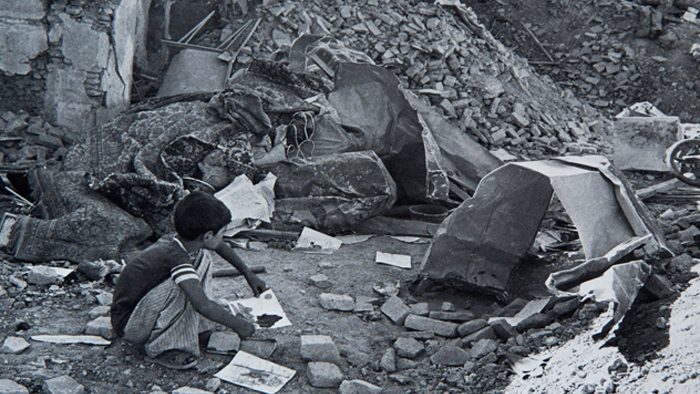 The following is an excerpt of the message of the Democratic Organisation of Iranian Women to Women’s International Democratic Federation, on the rising tensions and the need to stop another war in the Middle East.

‘As you know, the tensions between Iran on the one hand, and the Trump Administration together with its regional allies such as Saudi Arabia and Israel, have been intensifying and the drums of war are sounding again. Without a serious and concerted struggle to stop war, another catastrophe can befall the world. Progressive forces and peace activists in Iran and the world are voicing their deep concern at the intensification of this dangerous trend which, in addition to verbal threats by both sides, has led to the massive increase in the deployment of the imperialist war machine in the region.

The instigators of this tension are the racist and neo-fascist Trump administration in the USA and its allies in the world and the region on the one hand, and the despotic regime of Supreme Religious Leader which faces increasing political and economic crisis in the country, and whose survival depends on preserving a theocratic dictatorship, and guaranteeing the interests of big capitalists, middlemen and rentiers, on the other hand. Neither have any compunction about killing millions of innocent people and destroying the vital infrastructure of the country. A military confrontation will only benefit the material and political interests of the belligerents in power.

In the early years after the Revolution of 1979, the war-mongering leaders of the Islamic Republic offered slogans such as  ‘war is a blessing’ and called for the continuation of the destructive Iran-Iraq war even after the liberation of Khoramshahr from the occupation of the Iraqi regime’s forces, and missed the opportunity to end the war by negotiation. This stance led to massive human loss of life and the destruction of our country’s resources. The regime also used the war as a pretext to summarily and secretly execute around 5,000 political prisoners, ultimately using the war to defeat the Revolution. Today, too, the war-mongers are attempting to use the climate of security threat and war, in order to crush people’s protest movement.

In the last decade alone, the rabid, war-mongering imperialists and their allies have started destructive wars in many countries in the region, namely, Afghanistan, Iraq, Libya, Iraq, Libya, Syria, and Yemen, and they have profited from these wars by hundreds of millions of dollars. The sale of billions of US dollars’ worth of military hardware to the reactionary regime of Saudi Arabia, and the recent dispatch of warships to the Persian Gulf are in line with the US attempts at establishing its domination on the energy sources in the region.

On another hand, in our country, under the rule of despotism and injustice, the anti-people policies of the regime have caused economic bankruptcy, and deepening poverty for most of our people. More than three decades of neo-liberal policies, closure of manufacturing and production units, increasing unemployment especially among women, zero-hour contracts, and privatisations, a rentier economy, have meant that the class division has become ever greater, and the ordinary people’s living conditions have become intolerable. In addition, the imposition of back-breaking sanctions by the US have targeted ordinary people and has made the lives of workers and the poor evermore difficult, and has affected women even more so.

The people of Iran know well that their demands for an end to the economic and social problems they face, and for freedom and democracy, depends on their own relentless struggle. They strongly oppose any imperialist intervention in the country and believe that war and imperialist threats only serve the prolonging of the current conditions and will increase the climate of security tensions and the suppression of the protest movement. For this reason, the people of our country fight on two fronts: against the medieval regime that considers itself to be the representative of god and to have jurisdiction on the life and property of the people, and against its the anti-people economic policies that have driven the people to destitution; they also fight against aggressive imperialist plans of war in the region and in Iran. The slogan of the people of Iran is: ‘No to War, No to Sanctions, No to Despotism’.

Ordinary people, at their forefront, women and children are the main victims of wars and displacements. The intensification of tensions and the start of another war, will lead to another catastrophe that will affect the people of the Middle East as well as Iran, threatening to plunge the whole region in an extended war and ruination. In this midst the ordinary people who play no part in the start of wars, become targets for the conflict. The hardship that women and children face in ordinary conditions are multiplied manifold in war conditions.

The Democratic Organisation of Iranian Women appeals to all its comrades and peace activists, worldwide, to mobilise public opinion and seek assistance from international organisations, especially the UN, to stop a new catastrophe from developing in the Middle East and Iran. We must not allow women, children and millions of innocent people, the human and natural resources of Iran to fall victim to the destructive plans of imperialism.’