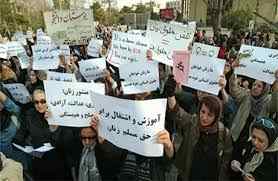 In recent years that the capita-list system has increasingly put the burden of its crises on the shoulders of women, we have witnessed the deterioration of the living and working conditions of women across the world. The owners and holders of wealth and power try to overcome and go through the crises by intensifying the exploitation of women in every aspect, but our sisters have risen all around the world and have raised their voice of protest in every possible opportunity.

The women’s struggle is not only for women, but is a struggle for all the humanity to realize a humane life, freedom, equality, and social justice. It is essential that all humans who believe in equality, freedom, and social justice join in this struggle. A society whose half of population is not free and is under various pressures and political, social, economic, and social discrimination cannot be a free and democratic society. In a society where there is no equal rights and freedom for women, the concepts of democracy and social justice are meaningless and unreal.Various gender discrimination in workplaces are one of the main factors in diminishing economic opportunities for women. This is while women have demonstrated that under equal conditions, can be as successful and even more productive and efficient than their male counterparts in many economic, social, and political endeavors and undertakings, but the prevailing laws always holds them under various pressures and discrimination. Even in many of the “advanced” countries of the world, there are unwritten rules and regulations that impose restrictions on women in various ways. For example, working mothers who are breadwinners of the house and have children, on average have less chance to get hired compared to women who don’t have children, or men with comparable family and job conditions. Even when hired, such women are paid less wages and benefits for equal work.

Such discrimination imposed on the women of Iran, stem from the shadow of reactionary and theocratic viewpoints cast over our country in the past several centuries. However, these repressions and discrimination have been challenged by the relentless struggle of women to achieve freedom and equal rights with men. These women have always fought in the course of social movements for freedom and equality, alongside other social groups, but have always been deprived of their rights and freedom.After the popular revolution of 1979, and following the founding and establishment of Islamic Republic based on theocracy and individual tyranny of the Supreme Leader, whose policies are deeply anti-people and misogynistic, the women of Iran who demanded their real and human rights, unfortunately lost many of their achievements they had won over decades of struggle for freedom and rights. The ruling reactionary regime of Iran, blatantly unfaithful to the people and particularly the women, has trampled and destroyed their individual and societal rights, social position, and identity by enacting medieval laws. The women of Iran, suffering from such inequalities and discrimination for years, are in a situation that in many cases is even worse than the living and working conditions in many underdeveloped countries of the world. The discriminatory laws of marriage, divorce, custody of children, and heritage, and imposition of numerous restrictions on the personal and social freedoms, have made the lives of the Iranian women comparable to the conditions of women during slavery.In our country Iran, the dark-minded and reactionary rulers exploit the religious rules and laws to degrade women, have no respect for their rights, and prosecute, torture, and imprison the women movement activists. However, despite the steady and inhumane pressures on women, the women movement of our nation continues its struggle bravely and consciously. Iranian women have launched several movements that have had significant impacts on organizing the women and increasing the awareness among them. The “One Million Signature Campaign” against the gender discrimination, the “Mothers of Peace” campaign, other campaigns targeting the violence against women and children, and forming social and trade organizations, are all examples of wide-ranging efforts of women on this path.

This year, the Iranian women celebrate the International Women’s Day when the fervent participation of women in protest movements, and particularly their heroic struggle against the compulsory hijab (head and body covering of women) has challenged the socioeconomic policies of the oppressive and misogynistic regime of Iran. For this reason, the security apparatus of the theocratic regime, fearing from any organized and coordinated campaign of progressive forces, has fortified its attack on the worker, student, and women activists.

This is an unavoidable reality that the root of political, social, and economic discrimination and pressure on women is in the economic system of the society. In our country Iran, too, the Neo-liberal economic system imposed on the nation, combined with the reactionary religious viewpoints of the dark-minded rulers, have posed the Iranian women with a very difficult struggle. The victory in this struggle, and similar popular and right-seeking movements of the workers, students, and other working people, hinges on the collaboration and coordination of these movements in getting rid of the rule of the theocratic regime of Supreme Leadership and replacing it with a democratic system in which the state is separate from religion. The women of Iran very well know that fundamental and major changes are not possible as long as the theocratic regime of Iran reigns. It is only through relentless and harmonized struggle of the various social movements, including the women movement, that broad and enduring achievements could be won.