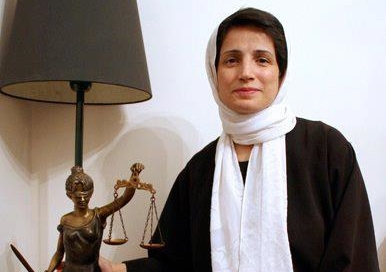 The Islamic Republican regime has recently passed a sentence of 38 years imprisonment and 148 lashes of flogging on the human rights lawyer, Ms. Nasrin Sotoudeh, and puzzled international public opinion. Nasrin Sotoudeh who has defended many civil or human rights activists who have become political prisoners was arrested in June 2018 for having been critical of the regime and the extent of arrests in the country. She has been kept in the notorious Even prison ever since. Mr Khandan who is married to Sotoudeh, wrote on 11th March 2019:

“The latest sentence on Nasrin Sotoudeh was conveyed to her in prison. 38 years with 148 lashes are the result of her two current files. She has been given 5 years on her first and 33 years of 148 lashes on the second.” The Revolutionary Court deemed Ms Sotoudeh’s defence of women’s rights and her opposition to forced ‘hejab’, to be the ‘promotion of corruption and prostitution’.

The court’s ruling shows, more clearly than ever, the unchanging determination of the regime’s judiciary to suppress dissenters and human and civil rights activists. Many well-known figures and human rights bodies worldwide have condemned such a harsh sentence, in contravention of law and principles and legal logic. A group of Iranian attorneys have issued a declaration condemning the sentence:

“The passing of such a harsh sentence is cause for shame and a sign of a lack of tolerance in relation to lawyers who are critical, and implies a weak judicial justice, and is in clear contravention of the provision in the Constitutional law, fundamental human rights and the role of lawyers.”

The Head of the Society of the Society for the Defence of Human Rights, Abdolkarim Lahiji, wrote: “Within the rule of the supreme religious leader, the punishment for opposing capital punishment, forced ‘hejab’ and defence of the political prisoners and prisoners of conscience, is long imprisonment and lashes. The judicial- security system knows that these wrong and harsh sentences will not defeat the resistant spirit and determination of Nasrin Sotoudeh in her defence of the wronged. However, their true aim is to create fear and terror among the people who are protesting increasingly for their political, civic, social, political and cultural rights. The international society cannot and must not ignore this farce against international law and human rights.” The speaker for the European Union has commented that Nasrin Sotoudeh, has been sentenced in her absence, without a fair trial and in breach of the most basic rights of an accused.

Nasrin Sotoudeh, member of the Peace Council and the Centre for the Defence of Human Rights, also member of the Campaign for the abolition of the death penalty, is one of hundreds of women political prisoners who have been imprisoned on the charge of ‘Dissemination of Falsehoods with the intention to disturb public opinion’, ‘Assembly and Collusion against the national security’, disturbing the ‘security’ of the reactionary regime of supreme religious leader, or ‘propaganda activity against the system’ and the like. Prisoners who despite having young children, have been left without word from them for months or years, as a form of torture for mothers in prisons, yet they continue their struggle in Iran’s prisons.

According to the report of HARANA, the news organ of the human right activists in Iran, on 28th September 2018, in addition to the dervishes imprisoned in ‘Karchak prison’ and also the environmentalist women who are held in the security wing of the Revolutionary Guards, in the women’s wing of Evin prison, currently there are 17 women, incarcerated mainly for political and security reasons. Their names are:

Nasrin Sotoudeh Langaroodi- born 30 May 1963 – sentence: delivered recently after a long period of uncertainty, as 38 years imprisonment and 148 lashes of flogging

The Democratic Organisation of Iranian Women, in unison with all defenders and fighters for equality and civil rights, condemns the judiciary of the Islamic Republic, in the strongest possible terms, for the sentence it has passed on Ms Nasrin Sotoudeh. We demand the release of this well-regarded human rights activist, and all women political prisoners. The release of all political prisoners is one of the most urgent demands of the popular and patriotic forces of our country.