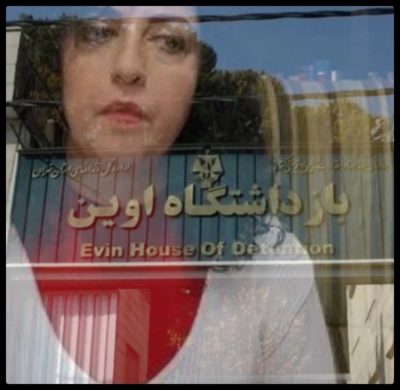 In the throes of the 100th day of Iran’s protests, in a note from her prison cell, Narges Mohammadi, the civil and human rights activist who has been held in Tehran’s notorious Evin prison for several years, has been made public, a shocking account of the sexual assault on protesting women, by the Islamic Republic’s agents. The Democratic Organization of Iranian Women (DOIW) condemns the brutal crimes that the misogynist regime commits in its torture chambers, and here we publish Ms. Mohammadi’s letter relating the accounts of “sexual assault on protesting women”, as posted on the Telegram Channel of the “Defenders of Human Rights Centre”.

“For months, my country has been witnessing a massive popular uprising and widespread street protests that seek a peaceful transition from the Islamic Republic, for democracy, human rights, and an end to tyranny. Women have had a significant impact in this protest movement, and the authoritarian and misogynist government has intensified the violent treatment of women in a bid to suppress this movement.Assaults on women – a pre-existing means of exerting pressure on and oppressing women, has been widely used during arrests and in detention centers, during the recent events. I am taking this step as a protest against the assaults on women and in order to expose and stop it, and I ask for your help in making it known to world public opinion in order to stop this inhumane way of suppressing women.

In the past few days, a number of detainees from the recent events have been transferred from the places of their arrests in the streets, from the solitary cells of Evin security blocks, some unknown detention centers or from Qarchak prison in Varamin to Evin women’s general prison, who have shocking accounts of the methods of assaulting women.A month ago, one of the detainees, who was in effect kidnapped in the street, was transferred to our prison ward in Evin. She is a young girl who is a known activist and despite the bitter experience of sexual assault, she came to prison with a very high and strong spirit. From the moment she entered the ward’s quarantine, she made a written complaint against the offending officer and objected to the sexual assault, to the prison and requested an investigation.I saw bruises and scars on her stomach and around her wrists and ankles. She was arrested in the street while going somewhere from home, and she was not arrested in street demonstrations at all. But her arrest was accompanied by violence. While being transported to the prison in handcuffs, one of her hands and one of her legs were tied to the car clamps above her head, and while she was hanging, the officers inside the car assaulted her by hand. Not only was the complaint of this well-known young woman not investigated, but despite our organised sit-ins and protests in the prison, after 4 days she was forcibly transferred to the remote Qarchak prison.

A few days ago, some well-known civil activists were transferred from Qarchak prison in Varamin to Evin women’s ward. They had several accounts of harassment and assault on detained women and recent protesters. These accounts of sexual physical and verbal assaults have been communicated several times to the authorities who visited Qarchak prison.

For example, on the 9th of December, the Human Rights Officer of the Judiciary, Mr. Kazim Gharibabadi, and moreover, the Head of the Prisons Organization, Mr. Hayat al-Ghaib, and members of parliament, including [Ms] Zohreh Elahian, who went to Qarchak prison to investigate the situation of the detainees, heard these accounts and complaints and promised to follow up, but unfortunately not only were no investigations carried out, but the State Radio and Television denied them in its 20:30 program and as soon as detained civil activists held in Qarchak, including Vida Rabbani and Mojgan Inanlu made protests and persevered, they were transferred from Qarchak to Evin prison so that the voices of the detainees could not be heard.

One of the girls was made to get on a motorcycle when she was arrested during street protests by 2 members of the security forces. One agent sits in the front of as the driver and the other sits behind her to guard her, and she is repeatedly harassed and sexually assaulted on the way.

Generally, women have faced sexual obscenities and reference to genitals when being arrested in street protests, in temporary detentions, and during interrogations. One of the factors that makes the physical and verbal sexual assault on women and girls is their dispatch from Qarchak prison to Agahi Shapur. Agahi Shapur detention center is one of the most notorious and feared in Tehran, where the so-called “technical interrogations” are carried out, and beatings, hangings, and where physical tortures to obtain confessions are common, and where a significant number of people are killed during interrogations.Generally, those arrested with heavy charges of theft, murder, and criminality are taken to Shapur for technical interrogation, and it raises this serious question, why are 17- and 18-year-old girls taken to Shapur Agahi?The truth is that recounting these shameless assaults can intimidate and make families fearful on the one hand, and on the other hand, not recounting them would be tantamount to covering-up the government’s crimes, and not disclosing them allows the continuation of this method of oppression against women. Therefore, it seems that the assaults on women activists, fighters, and protesters in Iran must be reported widely and powerfully at the global level, so that by exposing them, we can stop them and turn the assault on women from a threat and a cause for women’s withdrawal from the scene, to one that weakens the aggressor state and pushes it back.This is where I emphasize that courage and bravery, and steadfast struggle, if accompanied by media coverage and the support of human rights institutions, will be effective and will achieve its goals, especially in the current situation, when due to the government’s widespread repression, independent civil institutions are under pressure and civil activists in various fields are under arrest and in prison. In the absence of powerful independent civil institutions, the attention and support of the media, international human rights institutions and global public opinion is essential.As a woman and a civil activist who works for people’s peaceful transition from the religious, authoritarian and misogynistic rule and who works for the realization of democracy, human rights and freedom, I, myself, have tasted the bitter taste of assault on women, on 24th December 2019, in Evin prison and protested, I believe that we brave, resilient, lively and hopeful women in Iran, despite being aware of the repressive and violent methods of the government and the possibility of aggression and even rape, will come to the streets and continue to fight and we will not retreat until the moment of victory which means the establishment of democracy, peace and human rights and ending tyranny.”