The Iranian New Year (21st March 2019) and Spring, this year, coincided with destructive floods in the north of our country and in many other provinces of Iran. Despite advance warnings of meteorologists many villages were flooded or were cut off by flood water. 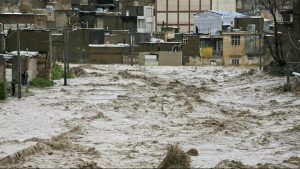 In addition to extensive material damage and the destruction of large tracts of farming land, 45 people, mostly women and children are reported to have lost their lives. The number of injured in the central historic city of Shiraz has been put at 94 and the authorities have so far declined to declare the official estimate of the damage suffered across the country. In the early days of the floods, with state organisations and official media notably absent, the people of our country witnessed, once again, the ineptitude and lack of interest of the regime’s leaders in managing the crisis. Civil activists and local groups risked their lives and, in contrast to the regime who is indifferent to the people’s suffering and absent from the scene, went to the assistance to those affected, with the motto: “we have one another”. The courageous people of our country did not stop at any effort. Sadly, in the early stages of the assistance, there were reports that one boat capsized, and several volunteers lost their lives.

Many environmentalists are of the view that the regime’s development schemes have played a major part in this disaster, such as: building dams without strategic studies on their long-term impact on the local environment, the lack of attention to topographic and geographic conditions, building on flood-prone areas and blocking the path of dried river beds, deforestation, the continuous destruction of the natural environment, and also the incompetence and lack of action by the officials in crisis response. The regime’s record in responding to crises is well demonstrated in the aftermath of the earthquakes of recent years, when despite all its promises in the official media, two years on, large numbers of people are still living in tents in the earthquake-hit area of the West of Iran in Sar-e-pol-e-Zahab.

The Democratic Organisation of Iranian Women expresses it deep solidarity with the affected people of our country and offers its condolences to the families of those who have lost their lives, whose grief we share. We convey our greetings to the civil activists and the ordinary people who rushed to the assistance of those affected, albeit with limited possibilities. The immediate assistance of spontaneously-formed groups, given to those affected by the floods, in the face of all the obstructions by the regime, is an indication of the spirit of humanitarian and selfless solidarity with our oppressed people. Our people continue to struggle against the regime of supreme religious leader, despite being under the most severe economic pressure and socio-political limitations, while at the same time, during sensitive historical events, or environmental disasters such as earthquakes, floods and the like, they have not stopped at any effort to help each other. Solidarity and joint struggle are the key to our victories-to-come.